Both Microsoft and Google (and probably others) have a flawed method of calculating standard deviations. They hit the limits of the calculation engine with large numbers. They have no interest in fixing the flaw - perhaps so you always get the same perhaps wrong answer with different versions of Excel.
Try SD of 1,2,3 = 1
But add 1E+16 to each number and you get zero. Add a number between 1E+15 and 1E+16 and you get a range of numbers for the SD.
Taking the mean of the series from each number before calculating the SD seems to solve the problem
May be a vaguely useful function for the toolbox. 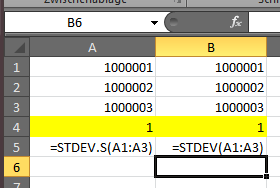 You would rarely get this situation in practice, but anyone using Excel
seriously should be aware of the limitations

​
Its really about the machine epsilon

Get Machine epsilon in Microsoft Excel

I was forced to learn a bit about Excel when I was doing some numerical
modelling and ended up with some 400 spreadsheets. I produced (spaghettli
code) to loop through the work sheets and produce an Index worksheet. I
used Ctl Shift G in a blank square to return to the Index sheet and then
the same keystrokes in that sheet to go to a particular sheet, Cell A1 in
each sheet was reserved for a comment which was listed in the index, along
with the Y axis for graphs.

Another macro I still find useful saved Charts as PNG files in the same
directory as the spreadsheet, using the name of the chart tag as the
filename. When I was running my numerical models, the model parameters were
inserted in the chart tag and made a unique file name. Simple code, but
saved me a lot of time.

Another function I used sometimes was for calculating the geometric mean of
a series when some of the numbers were zero or negatived. This occurs when
the numbers produced by an instrument sometimes go negative. I’d replace
the zeros/ small negative numbers during the GM calculation with a small
number/ detection limit.

Feel free to use the ideas

As for a UDF (user-defined function), I’d be a bit hesitant to add (another) one. UDFs tend not to work very well when a workbook is opened on a different computer. I used to have a =panova function in the older versions that computed the p value for an analysis of variance.

Another macro I still find useful saved Charts as PNG files in the same directory as the spreadsheet, using the name of the chart tag as the filename.

There’s the screenshot command right now to quickly export charts to PNG files. It’d be fairly easy to construct a default file name based on the chart name.

Thanks for your suggestions!